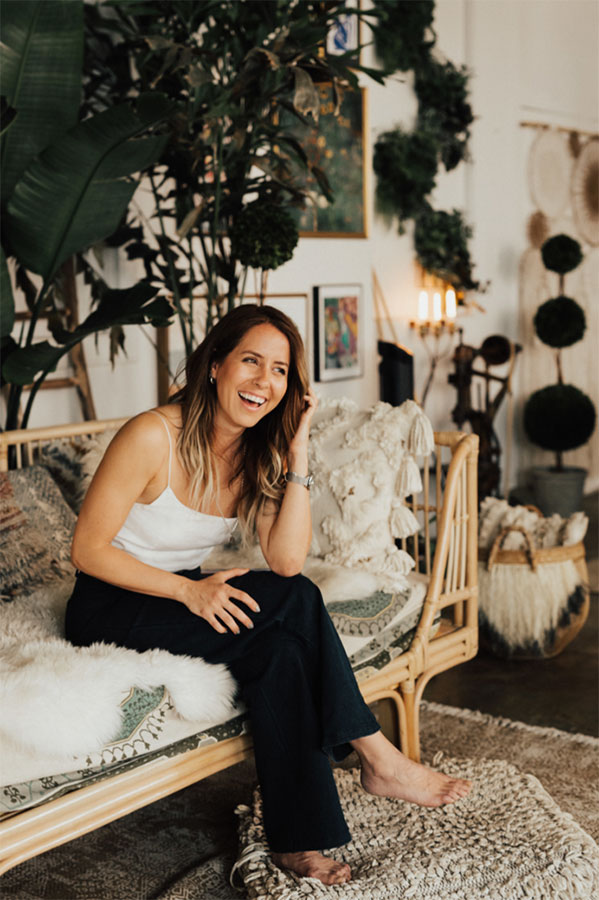 Having lived in both Turkey and California, Cansu Cansever was inspired to create her brand, The Handloom. As a result, her design aesthetic with The Handloom is a blend of the ethnic and oriental background of Turkey mixed with California’s minimal beach lifestyle. When you look at the kimonos, kaftans, and towels, you see the earthy tones and minimal aesthetic of California which meets traditional Turkish patterns and premium quality of textiles.

She moved to the United States ten years ago with a Turkish towel that her mom gave her and that towel which was such great quality lasted her throughout her moves around the Los Angeles. The high quality of this towel and her idea to introduce these products in the US is what started The Handloom with Turkish towels but Cansu was not satisfied with just reselling towels. She started to cut and sew various Turkish towels turning them into kimonos and kaftans. In addition, Cansu’s lifestyle which includes snowboarding, surfing, camping, exploring the woods and traveling to different countries, also led her to create a leisure/relaxation lifestyle brand.

The art of handlooming was invented in the 13th century. Handlooming is such a unique, complicated, and labor-intensive process that requires a lot of patience and is detail oriented. It is made by one simple, old-school wooden machine operated by one skilled artisan who stands by a machine continuously to pull the shuttle between the raised warp threads. That is where the delicacy of handloomed fabrics come from.

Cansu is now a full-time entrepreneur and enjoys being able to set her own hours, focusing on her creative instincts, and being able to travel which is what she enjoys the most. The peaceful lifestyle that her work provides and the pleasure of staying true herself is reflected in her work.

“It’s an honor to be selected by Cultura Collection with like-minded brands and makers under the same platform. In an era of mass production, I think we are pioneers to getting attention to high-quality and deeply thought-out fashion. That’s why Cultura will be revolutionary in challenging the status-quo.” Cansu Cansever